Genetic Diversity of Cacao and its Utilization 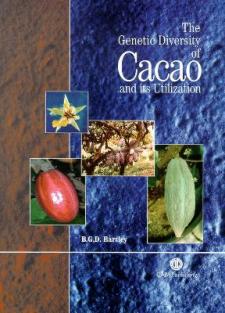 The cacao (Theobroma cacao) plant is an important Neo-Tropical species whose natural habitat is the Amazon basin. Over the last 30 years there has been a considerable geographical expansion in the availability of cacao genetic resources. As a result the plant has a rich genetic diversity that exists at two levels: that of the primitive populations in the area of original distribution of the species, and that of the derived cultivated populations. This book provides a comprehensive review of our current knowledge of the diversity of the species. It starts by examining the diversity and inheritance of the characteristics of primitive populations in the Amazonian and Caribbean regions. It then looks at the evolution of diversity within cultivated populations first in South America and around the Caribbean, and then beyond the Americas. The book describes the inter-relationships between populations based on morphological and molecular markers. It also examines the conservation of genetic resources and how these genetic resources can be utilized to produce new cultivars.