German Jewry and the Allure of the Sephardic 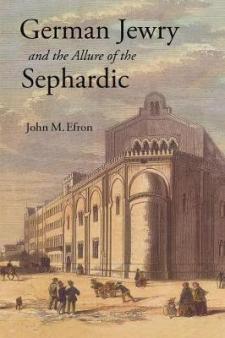 In the eighteenth and nineteenth centuries, as German Jews struggled for legal emancipation and social acceptance, they also embarked on a program of cultural renewal, two key dimensions of which were distancing themselves from their fellow Ashkenazim in Poland and giving a special place to the Sephardim of medieval Spain. Where they saw Ashkenazic Jewry as insular and backward, a result of Christian persecution, they depicted the Sephardim as worldly, morally and intellectually superior, and beautiful, products of the tolerant Muslim environment in which they lived. In this elegantly written book, John Efron looks in depth at the special allure Sephardic aesthetics held for German Jewry.

Efron examines how German Jews idealized the sound of Sephardic Hebrew and the Sephardim's physical and moral beauty, and shows how the allure of the Sephardic found expression in neo-Moorish synagogue architecture, historical novels, and romanticized depictions of Sephardic history. He argues that the shapers of German-Jewish culture imagined medieval Iberian Jewry as an exemplary Jewish community, bound by tradition yet fully at home in the dominant culture of Muslim Spain. Efron argues that the myth of Sephardic superiority was actually an expression of withering self-critique by German Jews who, by seeking to transform Ashkenazic culture and win the acceptance of German society, hoped to enter their own golden age.

Stimulating and provocative, this book demonstrates how the goal of this aesthetic self-refashioning was not assimilation but rather the creation of a new form of German-Jewish identity inspired by Sephardic beauty.