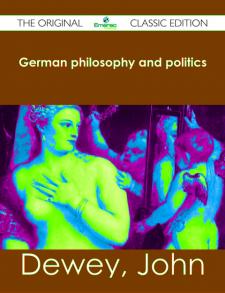 Finally available, a high quality book of the original classic edition of German philosophy and politics. It was previously published by other bona fide publishers, and is now, after many years, back in print.

This is a new and freshly published edition of this culturally important work by John Dewey, which is now, at last, again available to you.

Get the PDF and EPUB NOW as well. Included in your purchase you have German philosophy and politics in EPUB AND PDF format to read on any tablet, ereader, desktop, laptop or smartphone simultaneous - Get it NOW.

Enjoy this classic work today. These selected paragraphs distill the contents and give you a quick look inside German philosophy and politics:

When one considers the extent in which religion has been bound up with belief in miracles, or departures from the order of nature; when one notes how support for morals has been sought in natural law; how morals have been tied up with man's natural tendencies to seek happiness and with consequences in the way of reward of virtue and punishment of vice; how history has been explained as a play of moral forces—in short, the extent to which both the grounds and the sanctions for morality have been sought within the time and space world, one realizes the scope of the revolution wrought by Kant, provided his philosophy be 22true.

...Hence the conviction gained by countless unfruitful efforts, that reason alone will never get at the true foundation of things; hence the thoroughness of German science; hence a great many of the qualities that explain Germanic successes and failures; hence, perhaps, a certain stubbornness and obstinacy, the unwillingness to give up a conviction once formed; hence the tendency to mysticism; hence that 33continuous struggle which marks the history of German art,—the struggle to give to the contents powerful and adequate expression, and to satisfy at the same time the requirements of esthetic elegance and beauty, a struggle in which the victory is ever on the side of truth, though it be homely, over beauty of form whenever it appears deceitful; hence the part played by music as the only expression of those imponderable vibrations of the soul for which language seems to have no words; hence the faith of the German in his mission among the nations as a bringer of truth, as a recognizer of the real value of things as against the hollow shell of beautiful form, as the doer of right deeds for their own sake and not for any reward beyond the natural outcome of the deed itself.'

About John Dewey, the Author:

Dewey's most significant writings were 'The Reflex Arc Concept in Psychology' (1896), a critique of a standard psychological concept and the basis of all his further work; Democracy and Education (1916), his celebrated work on progressive education; Human Nature and Conduct (1922), a study of the function of habit in human behavior; The Public and its Problems (1927), a defense of democracy written in response to Walter Lippmann's The Phantom Public (1925); Experience and Nature (1925), Dewey's most 'metaphysical' statement; Art as Experience (1934), Dewey's major work on aesthetics; A Common Faith (1934), a humanistic study of religion originally delivered as the Dwight H.

...While some psychology historians consider Dewey more of a philosopher than a bona fide psychologist, the authors noted that Dewey was a founding member of the A.P.A., served as the A.P.A.'s eighth President in 1899, and was the author of an 1896 article on the reflex arc which is now considered a basis of American functional psychology.