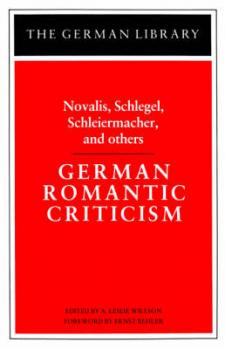 "German Romantic criticism represents a fundamentally dialectical type of thinking, " says Ernst Behler in his Foreword. "With Romantic criticism we are on the threshold of that phase of modernity of which we are still the inheritors." Among the brilliant discussions included in this volume are selections from Friedrich Schleiermacher, On the Different Methods of Translation, Jean Paul, School for Aesthetics, Novalis, Aphorisms and Fragments, Friedrich Schlegel, Dialogue on Poetry, Wilhelm von Humboldt, On the Imagination, Heinrich von Kleist, On the Marionette Theater, and a little-known essay of Friedrich Holderlin, On the Process of the Poetic Mind.