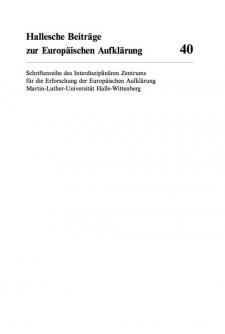 When the University of Halle-Wittenberg founded the Interdisciplinary Centre for European Enlightenment Studies in 1993, it was following the destiny of its history as a centre of the early Enlightenment in Germany which affected the whole of Europe. Research foci of the Centre are at the moment aesthetics, discourses of history, cultures of learning and erudition, university history and not least the wide field of early Enlightenment as a field of experimentation and the foundation of cultural models for the Modern Age. The results of this research have been published since Autumn 1995 in the Centres' research publications series entitled University of Halle Series on the European Enlightenment. In addition, there have been relevant works produced outside the Centre. Two to four volumes are published annually (monographs, collected volumes, commentaries on sources).