Gilbert of Sempringham and the Gilbertine Order c.1130-c.1300 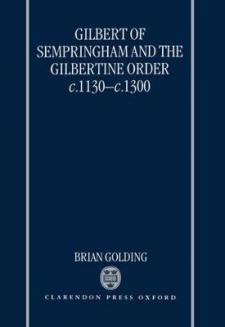 One of the most striking features of the twelfth-century Church was the growing desire of women for a greater role in the monastic life. Contemporary monastic reformers responded to his demand in various ways: some focused their appeal on women, others actively discouraged all contact; but all were agreed on the need to regularise religious life for women. In England this phenomenon is most clearly seen in the emergence of the Gilbertine order, founded by the
Lincolnshire priest, Gilbert of Sempringham. The Gilbertines were the only native monastic order in medieval England, and were highly unusual in their provision for both nuns and canons. In the first full-scale study since 1902, Brian Golding provides a comprehensive account of the history of the order from
its mid-twelfth century origins up to the early fourteenth century. His detailed analysis of the economy of the Gilbertines reveals much about monastic revenue and organization, and about the order's relations with their lay patrons and benefactors.

Dr Golding goes on to show that by 1300 the Gilbertine experiment was largely dead. The founding ideals of a structure in which men and women could live in harmony and order had given way to male domination and the marginalization of the nuns. This stimulating and informative study will be essential reading for all historians of medieval monasticism.