Global Space and the Nationalist Discourse of Modernity 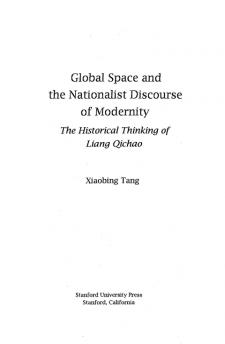 This book reexamines the historical thinking of Liang Qichao (1873-1929), one of the few modern Chinese thinkers and cultural critics whose appreciation of the question of modernity was based on first-hand experience of the world space in which China had to function as a nation-state. It seeks to demonstrate that Liang was not only a profoundly paradigmatic modern Chinese intellectual but also an imaginative thinker of worldwide significance. By tracing the changes in Liang's conception of history, the author shows that global space inspired both Liang's longing for modernity and his critical reconceptualization of modern history. Spatiality, or the mode of determining spatial organization and relationships, offers a new interpretive category for understanding the stages in Liang's historical thinking.

Liang's historical thinking culminated in a global imaginary of difference, which became most evident in the shift from his earlier proposal for a uniform national history to one that mapped "cultural history." His reaffirmation of spatiality, a critical concept overshadowed by the modernist obsession with time and history, made it both necessary and possible for him to redesign the project of modernity. Finally, the author suggests that the reconciliation of anthropological space with historical time that Liang achieved makes him abundantly contemporary with our own time, both inextricably modern and postmodern.