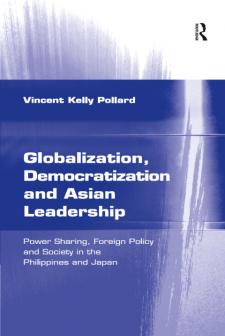 The foreign policies of presidents, prime ministers and their foreign secretaries can be influenced by the preferences of domestic and international nongovernmental actors, as well as those of other governments. Representative democracy, media power, citizen activism and the globalization of politics and telecommunications, for example, have accelerated changes in the sharing of power. This book focuses on the Philippines and Japan where, willingly and unwillingly, foreign policy executives share power with individuals and groups inside and outside of government bureaucracies and their societies. The book retells the foreign policy narratives of regional cooperation, military relations and official development assistance (foreign aid), revealing how executive foreign policy makers and civil society organizations share power - and succeed or fail - in a globalizing, democratizing world. A variety of published, unpublished and declassified sources provide journalists, scholars, government practitioners and global citizens with a sophisticated understanding of the domestic politics of foreign policy making, as well as its intergovernmental and transnational side.