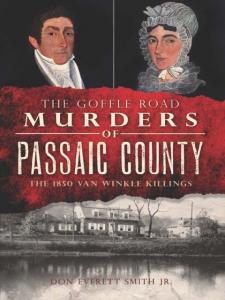 ';A fascinating trip back to a pastoral New Jersey where malls, gangsters and toxic waste did not exist, and violence still shocked the public.'Robert Schneck, author ofThe Bye Bye Man: And Other Strange-but-True Tales On January 9, 1850, Judge John Van Winkle and his wife, Jane, were brutally stabbed to death by their former farm hand, John Jonston, in their home on Goffle Road in Hawthorne, NJ (which is still standing). Their murder would go down in history as the first in Passaic County, and Jonston's subsequent hanging would become the first execution in the county. The events surrounding the murder would go on to inspire the work of New Jersey's greatest poet, Pulitzer-Prize winner William Carlos Williams. Since the Van Winkle home was described inThe New York Timesin 1882 as ';the abode of unearthly visitants,' there have been documented occurrences of the unexplained occurring. The current owner, Henry Tuttman, is working to bring the house into the 21st century while retaining its heritage. ';Those who love their history with a side dish of horror and a dash of macabre will not want to miss the offerings of Don Smith.'Linda Godfrey, author ofI Know What I Saw ';Reads like your favorite thriller only it's more frightening because it's fact.'Margie Gelbwasser, author ofInconvenient ';Don Everett Smith Jr. uncovers the true story behind the Goffle Road murders and the unusual connections with United States Vice President Garrett Hobart.'Cosmic Book News