Gothic Architecture and Sexuality in the Circle of Horace Walpole 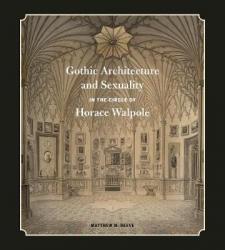 Gothic Architecture and Sexuality in the Circle of Horace Walpole shows that the Gothic style in architecture and the decorative arts and the tradition of medievalist research associated with Horace Walpole (1717-1797) and his circle cannot be understood independently of their own homoerotic culture. Centered around Walpole's Gothic villa at Strawberry Hill in Twickenham, Walpole and his "Strawberry Committee" of male friends, designers, and dilettantes invigorated an extraordinary new mode of Gothic design and disseminated it in their own commissions at Old Windsor and Donnington Grove in Berkshire, Lee Priory in Kent, the Vyne in Hampshire, and other sites.

Matthew M. Reeve argues that the new "third sex" of homoerotically inclined men and the new "modern styles" that they promoted-including the Gothic style and chinoiserie-were interrelated movements that shaped English modernity. The Gothic style offered the possibility of an alternate aesthetic and gendered order, a queer reversal of the dominant Palladian style of the period. Many of the houses built by Walpole and his circle were understood by commentators to be manifestations of a new queer aesthetic, and in describing them they offered the earliest critiques of what would be called a "queer architecture."

Exposing the role of sexual coteries in the shaping of eighteenth-century English architecture, this book offers a profound and eloquent revision to our understanding of the origins of the Gothic Revival and to medievalism itself. It will be welcomed by architectural historians as well as scholars of medievalism and specialists in queer studies.