Grammar of the Sanskrit Language 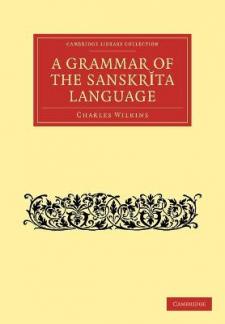 While working for the East India Company in Bengal, Charles Wilkins (1749-1836) became one of first Europeans to master the Sanskrit language. He proceeded to set up a printing press in Calcutta to publish works in Sanskrit and other Indian languages. Wilkins also undertook further related projects, including this work, published in London in 1808, which was part of his larger scheme to write a dictionary of the language and to translate a great epic poem, the Mahabharata. The grammar was the only part of the project that was completed. He never finished the dictionary, and only translated about one-third of the poem, though the part he worked on, the Bhagavad-Gita, became famous. The grammar attempts a comprehensive explanation of the language, ranging from the Devanagari alphabet to indeclinable words, and it was a vital resource in making Indian languages accessible to an English-speaking public.