Greek Myth and the Bible 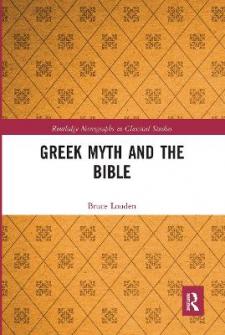 Since the nineteenth-century rediscovery of the Gilgamesh epic, we have known that the Bible imports narratives from outside of Israelite culture, refiguring them for its own audience. Only more recently, however, has come the realization that Greek culture is also a prominent source of biblical narratives.

Greek Myth and the Bible argues that classical mythological literature and the biblical texts were composed in a dialogic relationship. Louden examines a variety of Greek myths from a range of sources, analyzing parallels between biblical episodes and Hesiod, Euripides, Argonautic myth, selections from Ovid's Metamorphoses, and Homeric epic.

This fascinating volume offers a starting point for debate and discussion of these cultural and literary exchanges and adaptations in the wider Mediterranean world and will be an invaluable resource to students of the Hebrew Bible and the influence of Greek myth.