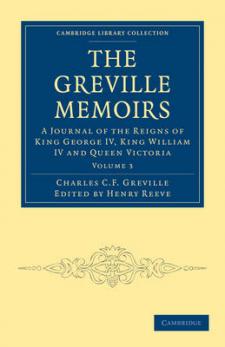 Charles Cavendish Fulke Greville (1794-1865) was one of the most important English political and social diarists. Clerk to the Privy Council for over forty years, he mixed with all the great political names of the day, including Wellington, Melbourne, Palmerston and Peel. Greville was fascinated by people, and a great collector of information, believing that 'there is always something to be learned from everybody if you touch them on the points they know'. Greville always intended his diaries to be published after his death. They appeared in eight volumes between 1874 and 1887, and form an important historical source for the first half of the nineteenth century. Volume 3 covers part of William IV's reign, difficulties over the Irish Church Bill, and worsening international relations. Domestic politics were unsettled, with four prime ministers in 1834 as the reformed parliament had trouble forming a government.