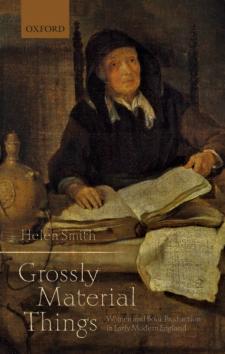 In A Room of One's Own, Virginia Woolf described fictions as 'grossly material things', rooted in their physical and economic contexts. This book takes Woolf's brief hint as its starting point, asking who made the books of the English Renaissance, and what the material circumstances were in which they did so. It charts a new history of making and use, recovering the ways in which women shaped and altered the books of this crucial period, as co-authors, editors, translators, patrons, printers, booksellers, and readers. Drawing on evidence from a wide range of sources, including court records, letters, diaries, medical texts, and the books themselves, 'Grossly Material Things' moves between the realms of manuscript and print, and tells the stories of literary, political, and religious texts from broadside ballads to plays, monstrous birth pamphlets to editions of the Bible. In uncovering the neglected history of women's textual labours, and the places and spaces in which women went about the business of making, Helen Smith offers a new perspective on the history of books and reading. Where Woolf believed that Shakespeare's sister, had she existed, would have had no opportunity to pursue a literary career, 'Grossly Material Things' paints a compelling picture of Judith Shakespeare's varied job prospects, and promises to reshape our understanding of gendered authorship in the English Renaissance.