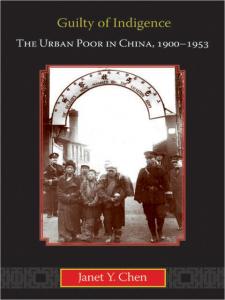 In the early twentieth century, a time of political fragmentation and social upheaval in China, poverty became the focus of an anguished national conversation about the future of the country. Investigating the lives of the urban poor in China during this critical era, Guilty of Indigence examines the solutions implemented by a nation attempting to deal with &quote;society's most fundamental problem.&quote; Interweaving analysis of shifting social viewpoints, the evolution of poor relief institutions, and the lived experiences of the urban poor, Janet Chen explores the development of Chinese attitudes toward urban poverty and of policies intended for its alleviation. Chen concentrates on Beijing and Shanghai, two of China's most important cities, and she considers how various interventions carried a lasting influence. The advent of the workhouse, the denigration of the nonworking poor as &quote;social parasites,&quote; efforts to police homelessness and vagrancy--all had significant impact on the lives of people struggling to survive. Chen provides a crucially needed historical lens for understanding how beliefs about poverty intersected with shattering historical events, producing new welfare policies and institutions for the benefit of some, but to the detriment of others. Drawing on vast archival material, Guilty of Indigence deepens the historical perspective on poverty in China and reveals critical lessons about a still-pervasive social issue.Some images inside the book are unavailable due to digital copyright restrictions.