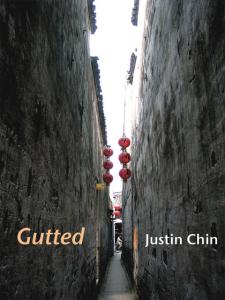 ';At his most flippant, Chin is downright charming.'Publishers WeeklyWhile trying to make sense of this ever-churning, terror-filled world, poet Justin Chin found himself traveling repeatedly home to Southeast Asiaa region unnerved and raging with SARS and the Avian Fluto help care for his father who had suddenly been declared terminally ill with cancer. In addition to his father's illness, Chin was managing his own health and medical annoyances and preparing for a looming US citizenship test. At the beginning of this difficult period, Chin quietly vowed not to speak publicly about his troubles until they had been suitably resolved. These poems mark the end of that resolution. Gutted is a document of growing oldera massively moving work of grief, loss, comfort, illness, and resolveimbued with Chin's unique screwy perspective, ever-defective grace, and scabrous humor.Justin Chin is the author of two poetry collections, Harmless Medicine and Bite Hard (Manic D Press), and two collections of essays, Burden of Ashes (Alyson Books) and Mongrel: Essays, Diatribes and Pranks (St. Martin's Press). Chin's writings have also been anthologized widely, notably in The Outlaw Bible of American Poetry (Thunder's Mouth Press), American Poetry: The Next Generation (Carnegie Mellon University Press), The World In Us: Lesbian and Gay Poetry of the Next Wave (St. Martin's Press), and Chick For A Day (Simon & Schuster). He has performed his work throughout the United States. He lives in San Francisco.