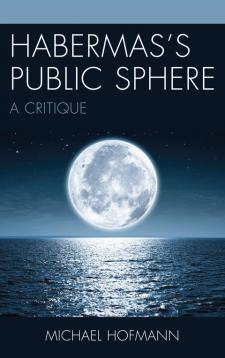 Habermas’s Public Sphere: A Critique analyzes the evolution of Juergen Habermas’s social and political theory from the 1950s to the present by focusing on the explicit and on the tacit changes in his thinking about The Structural Transformation of the Public Sphere, his global academic bestseller, which has been translated into 30 languages. Integrating “public sphere,” “discourse,” and “reason,” the three categories at the center of his lifelong work as a scholar and as a public intellectual, Habermas’s classic public sphere concept has deeply influenced an unusually high number of disciplines in the social sciences and in the humanities. In the process, its complex methodology, whose sources are not always identified, can be perplexing and therefore lead to misunderstandings. While Habermas’s “Further Reflections on the Public Sphere” (1992) contain several far-reaching clarifications, they still do not identify a number of the most important sources for his methodology, above all Herbert Marcuse and Ernst Bloch. Hence, a key purpose of this study is to thoroughly analyze the Marxist critique of ideology that Habermas uses in dialectical fashion for his theory reconstruction of Immanuel Kant’s liberal ideal of a rational-critical public as the organizational principle of the constitutional state and as the method of Enlightenment. Such dialectical thinking allows him to appropriate the structure of Reinhart Koselleck’s Critique and Crisis and of Carl Schmitt’s writings on the modern state while simultaneously upending their conservative critique of Liberalism and of the Enlightenment. However, this strategy restricts the application of his concept to his stylizations of the French Revolution and of his British “model case.” This critique reinvigorates Habermas’s seminal distinction between the purely political polis of antiquity, which excludes the private economy from the res publica, and the modern public sphere with its rational-critical discourse about commodity exchange and social labor in the political economy. At the same time, it identifies the crises of seventeenth-century England and the Dutch Republic as the origins of the new channels of public communication used to constantly evaluate the role of state power as political facilitator and regulator of an increasingly complex, dynamic, and crisis-prone market economy.