Handbook of Organization Theory and Management 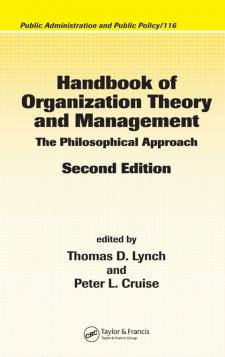 Few subjects are more influenced by philosophy than the form of governance that guides and administers public affairs, yet much of the literature about public administration remains silent about this connection. Handbook of Organization Theory and Management: The Philosophical Approach, Second Edition identifies and discusses many of the most important philosophies and movements that have influenced contemporary public administration. This resource begins with the classics, explores the postmoderns, and ends with 21st Century views. The text details many of greatest and a few of the lesser-known thinkers that have crafted the philosophical lens that we use to define and understand public administration. The second edition is made up of contributed chapters from renowned scholars. Many of the authors have revised and expanded their original contributions, and the book also contains ten new chapters covering schools of thought or movements that were not included in the first edition. The editors added extensive material that examines 21st Century alternatives to organization theory and management, including multicratic and virtual organizational structures and management approaches. Addressing thinkers and movements in the chronological order of their appearance, this text provides students of public administration and policy a unique picture of how we continually view, understand, and debate the proper application of public management and policy.