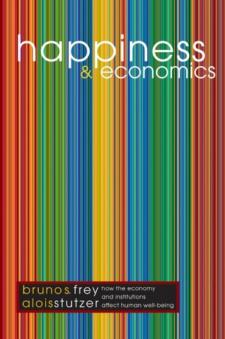 Curiously, economists, whose discipline has much to do with human well-being, have shied away from factoring the study of happiness into their work. Happiness, they might say, is an ''unscientific'' concept. This is the first book to establish empirically the link between happiness and economics--and between happiness and democracy. Two respected economists, Bruno S. Frey and Alois Stutzer, integrate insights and findings from psychology, where attempts to measure quality of life are well-documented, as well as from sociology and political science. They demonstrate how micro- and macro-economic conditions in the form of income, unemployment, and inflation affect happiness. The research is centered on Switzerland, whose varying degrees of direct democracy from one canton to another, all within a single economy, allow for political effects to be isolated from economic effects. Not surprisingly, the authors confirm that unemployment and inflation nurture unhappiness. Their most striking revelation, however, is that the more developed the democratic institutions and the degree of local autonomy, the more satisfied people are with their lives. While such factors as rising income increase personal happiness only minimally, institutions that facilitate more individual involvement in politics (such as referendums) have a substantial effect. For countries such as the United States, where disillusionment with politics seems to be on the rise, such findings are especially significant. By applying econometrics to a real-world issue of general concern and yielding surprising results, Happiness and Economics promises to spark healthy debate over a wide range of the social sciences.