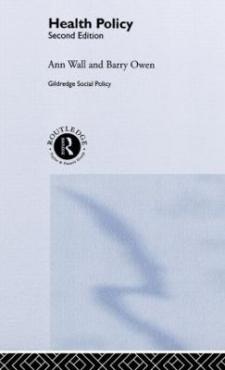 The health care system in Britain at the beginning of the twenty-first century is being subjected to radical rethinking. Health Policy examines how the NHS has developed to the point it has reached today as well as placing it in the wider context of the kinds of health care which are available to people in Britain.
It looks at key issues which have arisen in the provision of health care such as rationing, the operation of interest groups, relationships between the public, voluntary and private sectors and whether the NHS has delivered care equally to all sectors of the population.
In this second edition, the authors pay particular attention to the policy changes introduced by the Labour government following it selection in 1997 and places these within a wider discussion of the concept of a primary care-led system.
Health Policy will be especially useful to readers who wish to inform themselves about what is happening in the NHS today or to deepen their understanding of current developments through an appreciation of how the health care system has evolved over the past fifty years. It includes useful summaries of key points, guides to further reading and a glossary of key terms.