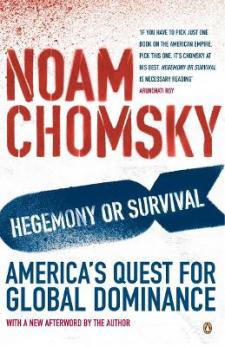 Noam Chomsky, the world's foremost intellectual activist, presents an irrefutable analysis of America's pursuit of total domination and the catastrophic consequences that are sure to follow.

From the funding of repressive regimes to the current 'war on terror', from the toppling of governments opposing its beliefs to the invasion of Iraq, America pursues its global strategy no matter what the cost. With the rigour and insight that have made him our most important unraveller of accredited lies, Noam Chomsky reveals the truth and the true motives behind America's quest for dominance - and seeks also to show how the world may yet step back from the brink.

'A devastating history of American foreign policy since 1945 as well as a dissection of the current "war on terror"' Tim Adams, Observer

'One of the radical heroes of our age. A towering intellect' Guardian

Noam Chomsky is the author of numerous bestselling political books, including Hegemony or Survival, Failed States, Interventions, What We Say Goes, Hopes and Prospects, How the World Works and Occupy, all of which are published by Hamish Hamilton/Penguin.