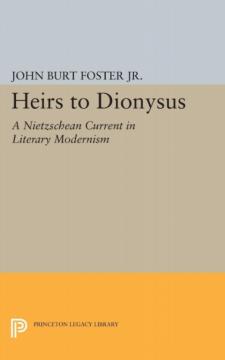 Building on recent transformative theories of influence, John Foster explores the many ways Nietzsche's intellectual and artistic example helped shape an interconnected series of major literary projects from 1900 to the 1940s. He portrays Nietzsche as a stimulating but disturbing force who left a well-defined legacy of concerns that modernists appropriated for their fiction. The author focuses particularly on Gide, D. H. Lawrence, Malraux, and Mann, analyzing their strategies of acceptance, revision, and subversion.Originally published in 1982.The Princeton Legacy Library uses the latest print-on-demand technology to again make available previously out-of-print books from the distinguished backlist of Princeton University Press. These editions preserve the original texts of these important books while presenting them in durable paperback and hardcover editions. The goal of the Princeton Legacy Library is to vastly increase access to the rich scholarly heritage found in the thousands of books published by Princeton University Press since its founding in 1905.