Herbals: Their Origin and Evolution 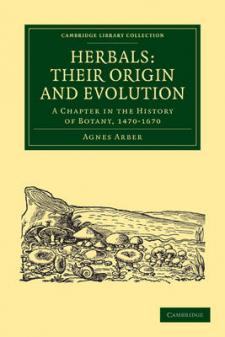 Agnes Arber (1879-1960) was a prominent British botanist specialising in plant morphology and the history of botany. In 1946 she became the first female botanist to be elected a Fellow of the Royal Society. First published in 1912 and issued in an expanded second edition in 1938, this volume traces the history and development of printed herbals between 1470 and 1670. This two-hundred-year period was the most prolific for the publication of herbals, and significantly saw the emergence of botany as a scientific discipline within the study of natural history. Although Arber mentions the medical aspects of the herbal, her analysis remains focused on investigating herbals from a botanical view, with chapters devoted to the evolution of plant descriptions, classifications and illustrations. Her book remains the standard work on this subject. The text of this volume is taken from a 1953 reissue of the 1938 second edition.