A Heritage of Ruins 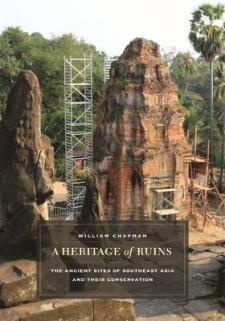 The ancient ruins of Southeast Asia have long sparked curiosity and romance in the world's imagination. They appear in accounts of nineteenth-century French explorers, as props for Indiana Jones's adventures, and more recently as the scene of Lady Lara Croft's fantastical battle with the forces of evil. They have been featured in National Geographic magazine and serve as backdrops for popular television travel and reality shows. Now William Chapman's expansive new study explores the varied roles these monumental remains have played in the histories of Southeast Asia's modern nations.

Based on more than fifteen years of travel, research, and visits to hundreds of ancient sites, A Heritage of Ruins shows the close connection between "ruins conservation" and both colonialism and nation building. It also demonstrates the profound impact of European-derived ideas of historic and aesthetic significance on ancient ruins and how these continue to color the management and presentation of sites in Southeast Asia today. Angkor, Pagan (Bagan), Borobudur, and Ayutthaya lie at the center of this cultural and architectural tour, but less visited sites, including Laos's stunning Vat Phu, the small temple platforms of Malaysia's Lembah Bujang Valley, the candi of the Dieng Plateau in Java, and the ruins of Mingun in Burma and Wiang Kum Kam near Chiang Mai in northern Thailand, are also discussed. All share a relative isolation from modern urban centers of population, sitting in park-like settings, serving as objects of tourism and as lynchpins for local and even national economies. Chapman argues that these sites also remain important to surrounding residents, both as a means of income and as continuing sources of spiritual meaning. He examines the complexities of heritage efforts in the context of present-day expectations by focusing on the roles of both outside and indigenous experts in conservation and management and on attempts by local populations to reclaim their patrimony and play a larger role in protection and interpretation.

Tracing the history of interventions aimed at halting time's decay, Chapman provides a chronicle of conservation efforts over a century and a half, highlighting the significant part foreign expertise has played in the region and the ways that national programs have, in recent years, begun to break from earlier models. The book ends with suggestions for how Southeast Asian managers and officials might best protect their incomparable heritage of art and architecture and how this legacy might be preserved for future generations.