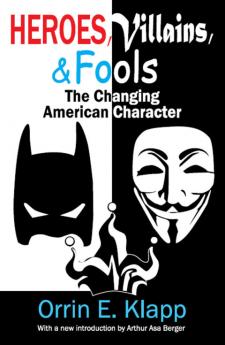 This volume presents three major social types in American society-heroes, villains, and fools-as models for American behaviour. Approaching these models primarily through language, Orrin E. Klapp explores what they may suggest about Americans as a people. Rather than study people, the author describes abstract types named and embedded in popular language. These social types are important symbols; and a way to attack a symbol is by identifying its meaning in various contexts. He further argues that the language surrounding heroes, villains, and fools reveals a social structure. We may not escape being ascribed a type, but we do have a choice of type. Known more commonly as "finding oneself," we can manipulate cues-with dress, facial expressions, style of life, or conspicuous public roles-to build an identity. This classic study has serious contemporary implications. For a public figure, an inevitable result of the typing process is the development of at least two selves, the public and the private. When the book originally appeared in 1962, the struggle to balance two images generally only plagued celebrities and politicians. Today, social media offers everyone the opportunity to develop an online persona. This volume will be of interest to sociologists as well as anyone who has a Facebook account.