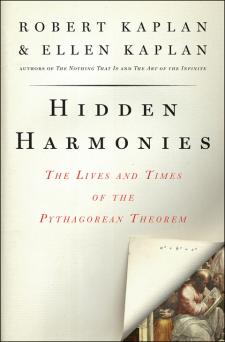 A squared plus b squared equals c squared. It sounds simple, doesn't it? Yet this familiar expression is a gateway into the riotous garden of mathematics, and sends us on a journey of exploration in the company of two inspired guides, acclaimed authors Robert and Ellen Kaplan. With wit, verve, and clarity, they trace the life of the Pythagorean theorem, from ancient Babylon to the present, visiting along the way Leonardo da Vinci, Albert Einstein, President James Garfield, and the Freemasons-not to mention the elusive Pythagoras himself, who almost certainly did not make the statement that bears his name. How can a theorem have more than one proof? Why does this one have more than two hundred-or is it four thousand? The Pythagorean theorem has even more applications than proofs: Ancient Egyptians used it for surveying property lines, and today astronomers call on it to measure the distance between stars. Its generalizations are stunning-the theorem works even with shapes on the sides that aren't squares, and not just in two dimensions, but any number you like, up to infinity. And perhaps its most intriguing feature of all, this tidy expression opened the door to the world of irrational numbers, an untidy discovery that deeply troubled Pythagoras's disciples. Like the authors' bestselling The Nothing That Is and Chances Are . . .-hailed as "erudite and witty," "magnificent," and "exhilarating"-Hidden Harmonies makes the excitement of mathematics palpable.