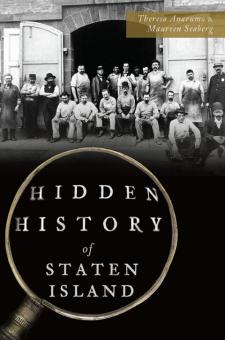 Take the ferry to this New York City borough and discover its colorful secrets, in a quirky history packed with facts and photos.   Staten Island has a rich and fascinating cultural legacy that few people outside New York City's greenest borough know about. Chewing gum was invented on the island with the help of Mexican general Antonio López de Santa Anna. Country music legend Roy Clark got his start as a virtuoso guitar player on the Staten Island Ferry. Anna Leonowens, who worked with the king's children in the Court of Siam and was the basis for The King and I, came back to Staten Island to write about her experiences and run a school for children.   Join native Staten Islanders Theresa Anarumo and Maureen Seaberg as they document the hidden history of the borough with these stories, and many more