A History of the Jews 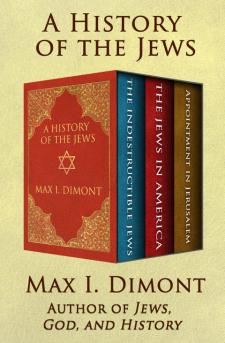 Three books on Jewish heritage from the author of Jews, God, and History, ';the best popular history of the Jews written in the English language' (Los Angeles Times). With over a million and a half copies sold, Jews, God and History introduced readers to ';the fascinating reasoning' of acclaimed scholar Max I. Dimont's ';bright and unorthodox mind' (San Francisco Sunday Examiner and Chronicle). In these three volumes, Dimont builds on the themes and insights presented in that seminal work, providing a rich and comprehensive portrait of the cultural and religious history of the Jewish people. The Indestructible Jews traces the four-thousand-year journey of the Jewish people from an ancient tribe with a simple faith to a global religion with adherents in every nation. Through countless expulsions and migrations, the great tragedy of the Holocaust and the joy of founding a homeland in Israel, this compelling history evokes a proud heritage while offering a hopeful vision of the future. The Jews in America offers an overview of Judaism in the United States from colonial times to twentieth-century Zionism. Dimont follows the various waves of immigration, recounts the cultural achievements of those who escaped oppression in their native lands, and discusses the attitudes of American Jewsboth religious and seculartoward Israel. Appointment in Jerusalem explores the mystery surrounding the predictions Jesus made about his fate. Dimont re-creates the drama in three acts using his knowledge of the events recorded in the Bible. Thoughtful and fascinating, his account offers fresh insights into questions that have surrounded religion for centuries. Who was Jesusthe Christian messiah or a member of a Jewish sect?