History of Psychology in Autobiography 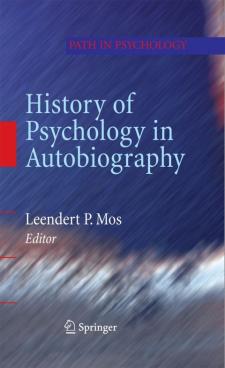 Since the 17th century, autobiography has an honorable place in the study of history. In 1930, the preeminent historian of psychology, Edwin Boring, writes that a science separated from its history lacks direction and promises a future of uncertain importance. To understand what psychology is and what it is becoming, the autobiographies of famous psychologists is history at it best. Here we find model inquirers of the science who offer a personalized account of themselves and their vocation in the context of the history of the science. What is characteristic of many of those who have contributed to an alternate vision of psychological science is that they never considered themselves, or were considered by others, as belonging to the mainstream of the discipline. In considering an alternative history of psychology in autobiography, the editor invited contributors whose research and writings have pushed the discipline in other directions, pushed its limits, and whose scholarship finds its philosophical framework outside the discipline altogether. If these contributors may not be model inquirers, their scholarship is very much a matter of consequence for those who wish to understand psychology. Among the outliers included here are those who devoted themselves to the writing of psychology, examining its history, theories, research and professional practices, and who enthusiastically embraced, over the course of their lives, the discipline as a human science. Their influence has been subtle as has been their appeal to many students who affection for the discipline finds its promise in a discerning self-awareness and a critical understanding of others and their worlds. This volume is not simply a collection of personal chronologies which might inspire or lend appreciation to a younger generation. Our contributors write from their personal and professional experience, of course, but they write of their thinking and understanding of the psyche as an aspect of human life, of psychology as an academic form of human sciences’ inquiry, and so bring to bear their scientific and philosophical imagination to their personal challenges in their chosen vocation as psychologists. Our contributors cover a broad swath of the second half of the 20th century, the century of psychology. Nurturing the discipline from within various philosophical, social-political, and cultural roots, their autobiographies exemplify marginality, if not alienation, from the mainstream, even as their professional and personal lives give expression to engaged scholarship, commitment to vocation and, straightforwardly and reflectively, a love of the heart. From Germany, Carl Graumann, from France, Erika Apfelbaum, from Canada, David Bakan and Kurt Danziger, and from the United States, Amedeo Giorgi, Robert Rieber, and Joseph Rychlak, relate their lives to the larger contexts of our times. Their personal stories are an integral part of the historiography of our discipline. Indeed, a contribution to historiography of our discipline is constituted in their autobiographical self-presentations, for their writings attest as much to their lives as model inquirers as they do to the possibility of psychology as a human science.