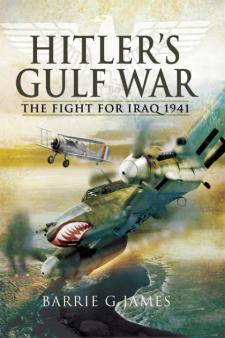 This military history of the Iraqi revolt in WWII, told from the point of view of the men who were there, is ';a fantastic and enjoyable book' (Col. Tim Collins, OBE). In the spring of 1941, on an airfield fifty-five miles from Baghdad, a group of RAF airmen and soldiers were outnumbered by the better equipped Iraqi forcessoldiers who were aided by the Germans and Italians. After thirty days, this battle resulted in the first real defeat of the Axis powers in World War II. Hitler's Gulf War presents the story of the Iraqi revolt from the perspectives of the British, Iraqi, and Germans who were involved in the battle. Along with the group at the airfield, historian Barrie G.James examines the small relief column of cavalry, infantry, and Bedouins who traveled across a five-hundred-mile unmapped desert to support the RAF. With Germany's successes in Greece and the Western Desert in 1941, a British defeat here would have changed the course of World War II. Hitler's Gulf War traces how the battle destroyed Axis aspirations in the Middle East and also set the scene for Iraq's future relations with the West.