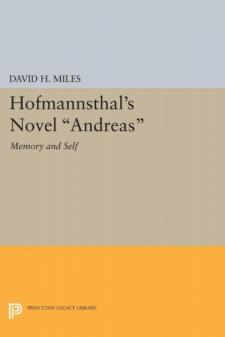 Although Hofmannsthal never completed his only novel Andreas, its theme—the quest for self through memory—haunted the Viennese writer and recurs again and again in his poems, libretti, and essays. Analyzing the fragment, David Miles discusses Hofmannsthal's understanding of memory and myth, Andreas' pivotal role in his work, and its place within the tradition of such novels as Goethe's Wilhelm Meister and Rilke's Malte. Originally published in 1972. The Princeton Legacy Library uses the latest print-on-demand technology to again make available previously out-of-print books from the distinguished backlist of Princeton University Press. These editions preserve the original texts of these important books while presenting them in durable paperback and hardcover editions. The goal of the Princeton Legacy Library is to vastly increase access to the rich scholarly heritage found in the thousands of books published by Princeton University Press since its founding in 1905.