Homosexuality in the Life and Work of Joseph Conrad 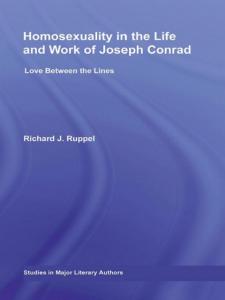 This book analyzes the representations of homosexuality in Conrad’s fiction, beginning with Conrad’s life and letters to show that Conrad himself was, at least imaginatively, bisexual. Conrad’s recurrent bouts of neurasthenia, his difficult courtships, late marriage, and frequent expressions of misogyny can all be attributed to the fact that Conrad was emotionally, temperamentally, and, perhaps, even erotically more comfortable with men than women. Subsequent chapters trace Conrad’s fictional representations of homosexuality. Through his analysis, Ruppel reveals that homoeroticism is endemic to the adventure genre and how Conrad’s bachelor-narrators interest in younger men is homoerotic. Conrad scholars and those interested in homosexuality and constructions of masculinity should all be interested in this work.