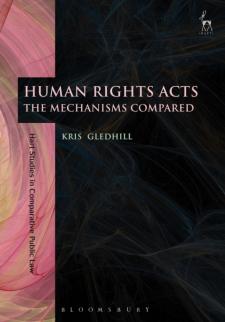 There are now a number of statutes in different parts of the world that offer non-constitutional protection for human rights through mechanisms such as strong interpretive obligations, quasi-tort actions and obligations on legislatures to consider whether statutes are felt to breach human rights obligations. They exist in New Zealand, the United Kingdom, Ireland, the Australian Capital Territory and Victoria.The aim of this book is to consider the jurisprudence that has developed in these various jurisdictions relating to these mechanics for the promotion of human rights; relevant case law from countries such as Canada, South Africa and the United States that have a supreme law constitutional approach is also featured. Chapters cover such matters as the choice between a supreme law and non-supreme law bill of rights, the different approaches adopted as to how legislators are alerted to possible breaches of fundamental rights as Bills progress, the extent of the interpretive obligation, the consequences of failing to reach a rights-compliant interpretation, and the remedies available in litigation.The book is aimed at practitioners and also at academics and policy makers.' Kris Gledhill addresses for the first time, and in some considerable detail, the dynamics operating within different common law systems that seek to integrate international fundamental rights obligations into domestic law . . . The strength of this book is to explore apparent antitheses . . . with intellectual depth so that the relationship between human rights law on the international level and human rights law on the domestic level becomes clearer and comes to be seen not so much as a sharp legal dichotomy but, rather, as the fashioning of mechanisms . . . to integrate international and domestic fundamental rights regimes so that they work harmoniously.' From the Foreword by Richard Gordon QC, Brick Court Chambers 'Gledhill's study bridges the gap between the promise of international human rights commitments and the protection afforded those rights by statutory bills of rights, a model that has been adopted in countries such as New Zealand, the UK, Ireland, and Australia. It is an invaluable resource.'Grant Huscroft, Western University Faculty of Law