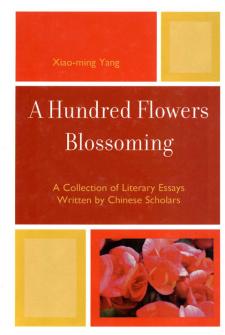 A Hundred Flowers Blossoming is a collection of literary essays written by faculty members of Xi'an International Studies University, China with two distinctive features. The first one is a Chinese perspective on Western literary works, which is normally not found in the scholarship in the West. The second is the feministic stance demonstrated in most articles, as most of the contributors are female. There are four parts in this collection. Part One is titled 'A Room of Her Own' and shows the feminist approach to literary works. Part Two is titled 'Through the Chinese Lens,' as it presents a Chinese perspective in the analysis of the literary works. 'Form Is Meaning' is the title of Part Three, which approaches literary works from a structuralist perspective. Part Four includes two articles: one exploring the theme of death in Joyce's Dubliners and the other reexamining the images of Faulkner's Trio of Hunting Tales.