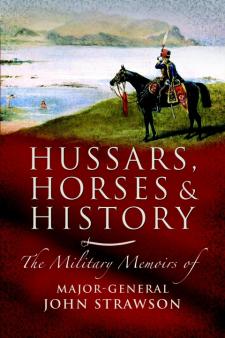 John Strawson describes joining the 4th Hussars in the Middle East in 1942 and serving with them until amalgamation with the 9th Hussars in 1958 as The Queens Royal Irish Hussars. He commanded the Regiment during the Borneo campaign and was Colonel from 1975 to 1985. His account of war in Italy and of operations in Malaya and Borneo are of special interest.This light-hearted memoir reveals devotion to his family, friends, Regiment and to horses. His adventures with horses and hounds, whipping-in to the legendary Loopy Kennard, and during his time as Master of the Staff College Draghounds are particularly diverting. Addiction to reading and writing led to authorship of twelve military history books.Military appointments included command of a brigade, two years at SHAPE and finally Chief of Staff, UK Land Forces. He then describes working as Westland Aircrafts Military Adviser, mainly in the Middle East and gives a vivid account of life in Cairo in the latter 1970s.In sum General Strawson shows how enjoyable, how varied, sometimes how demanding a soldiers life can be, above all how rewarding, made so by the priceless quality of the regimental system and the comrades with whom he served.