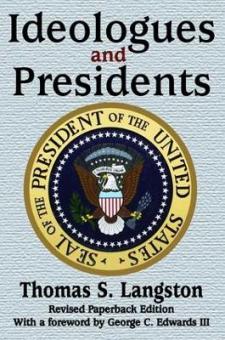 Ideologues and Presidents argues that ideologues have been gaining influence in the modern presidency. There were plenty of ideologues in the New Deal, but they worked at cross purposes and could not count on the backing of the cagey pragmatist in the Oval Office. Three decades later, the Johnson White House systematically sought the help of hundreds of liberals in drawing up blueprints for policy changes. But when it came time to implement their plans, Lyndon Johnson's White House proved to have scant interest in ideological purity.

By the time of the Reagan Revolution, the organizations that supported ideological assaults on government had never been stronger. The result was a level of ideological influence unmatched until the George W. Bush presidency. In Bush's administration, not only did anti-statists and social conservatives take up positions of influence throughout the government, but the president famously pursued an elective war that had been promoted for a decade by a networked band of ideologues.

In the Barack Obama presidency, although progressive liberals have found their way into niches within the executive branch, the real ideological action continues to be Stage Right. How did American presidential politics come to be so entangled with ideology and ideologues? Ideologues and Presidents helps us move toward an answer to this vital question.