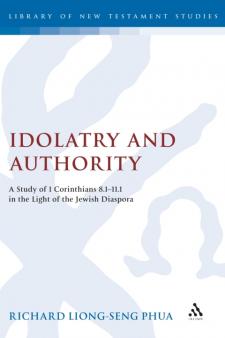 1 Cor 8.1-11.1 is concerned with the subject of idolatry in first-century Christianity and ancient Judaism. Jews and Christians differ over what constitutes idolatry and even within ancient Judaism and early Christianity there was no consensus. In this book, a set of definitions are created which are applied to the examination of the various relevant Diaspora Jewish literature, inscriptions and papyri, and finally the NT passage. This examination reveals different attitudes adopted by different Jews towards idolatry, which serve as parallels to the three positions in 1 Cor 8.1-11.1, 'the strong', 'the weak', and Paul.The resolution of the issue of idolatry lies in the question of who determines what is idolatrous and what constitutes proper Christian behaviour. This is accomplished through a comparison and contrast between leadership structures within Diaspora Jewish assemblies and the Corinthian church. Almost all the definitions of idolatry set up are operative in Paul, whose way of resolving the issue of idolatry is by appeal to biblical history. By insisting on his authority as the founding apostle and father of the Corinthian church, Paul can issue the injunction to the 'strong' to flee from idolatry because idolatrous behaviour would incur the wrath of God and lead to God's punishment, which is the loss of one's eschatological salvation. For the Diaspora Jews, the 'final court of appeal' was the law; but for the Corinthian church, the authority Paul sets up is Christ, the gospel, salvation, and Paul himself as the founding apostle.