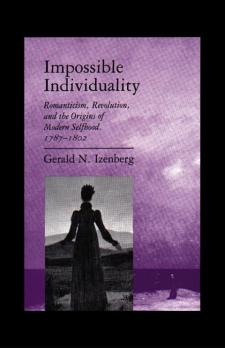 Studying major writers and philosophers--Schlegel and Schleiermacher in Germany, Wordsworth in England, and Chateaubriand in France--Gerald Izenberg shows how a combination of political, social, and psychological developments resulted in the modern concept of selfhood. More than a study of one national culture influencing another, this work goes to the heart of kindred intellectual processes in three European countries. Izenberg makes two persuasive and related arguments. The first is that the Romantics developed a new idea of the self as characterized by fundamentally opposing impulses: a drive to assert the authority of the self and expand that authority to absorb the universe, and the contradictory impulse to surrender to a greater idealized entity as the condition of the self's infinity. The second argument seeks to explain these paradoxes historically, showing how romantic individuality emerged as a compromise. Izenberg demonstrates how the Romantics retreated, in part, from a preliminary, radically activist ideal of autonomy they had worked out under the impact of the French Revolution. They had begun by seeing the individual self as the sole source of meaning and authority, but the convergence of crises in their personal lives with the crises of the revolution revealed this ideal as dangerously aggressive and self-aggrandizing. In reaction, the Romantics shifted their absolute claims for the self to the realm of creativity and imagination, and made such claims less dangerous by attributing totality to nature, art, lover, or state, which in return gave that totality back to the self.