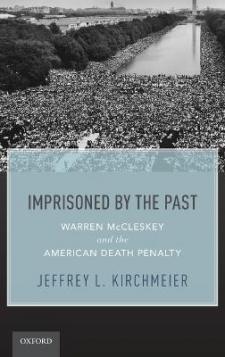 Imprisoned by the Past

In 1987, the United States Supreme Court decided a case that could have ended the death penalty in the United States. Imprisoned by the Past: Warren McCleskey and the American Death Penalty examines the long history of the American death penalty and its connection to the case of Warren McCleskey, revealing how that case marked a turning point for the history of the death penalty. In this book, Jeffrey L. Kirchmeier explores one of the most important Supreme
Court cases in history, a case that raised important questions about race and punishment, and ultimately changed the way we understand the death penalty today.

McCleskey's case resulted in one of the most important Supreme Court decisions in U.S. history, where the Court confronted evidence of racial discrimination in the administration of capital punishment. The case currently marks the last time that the Supreme Court had a realistic chance of completely striking down capital punishment. As such, the case also marked a turning point in the death penalty debate in the country.

Going back nearly four centuries, this book connects McCleskey's life and crime to the issues that have haunted the American death penalty debate since the first executions by early settlers through the modern twenty-first century death penalty. Imprisoned by the Past ties together three unique American stories. First, the book considers the changing American death penalty across centuries where drastic changes have occurred in the last fifty years. Second, the book discusses the role
that race played in that history. And third, the book tells the story of Warren McCleskey and how his life and legal case brought together the other two narratives.