Inclusion of the Other 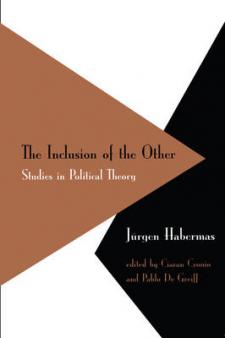 The Inclusion of the Other contains Habermasa s most recent work in political theory and political philosophy. Here Habermas picks up some of the central themes of Between Facts and Norms and elaborates them in relation to current political debates. One of the distinctive features of Habermasa s work has been its approach to the problem of political legitimacy through a sustained reflection on the dual legitimating and regulating function of modern legal systems. Extending his discourse theory of normative validity to the legal--political domain, Habermas has defended a proceduralist conception of deliberative democracy in which the burden of legitimating state power is borne by informal and legally institutionalized processes of political deliberation. Its guiding intuition is the radical democratic idea that there is an internal relation between the rule of law and popular sovereignty. In these essays he brings this discursive and proceduralist analysis of political legitimacy to bear on such urgent contemporary issues as the enduring legacy of the welfare state, the future of the nation state, and the prospects of a global politics of human rights.
This book will be essential reading for students and academics in sociology and social theory, politics and political theory, philosophy and the social sciences generally.