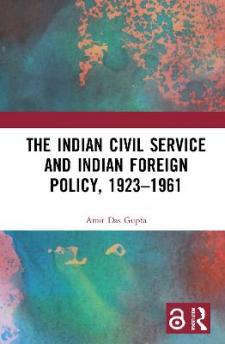 This book provides an authoritative account of the first significant overseas diplomatic missions and forays made by Indian civil servants. It recounts the key events in the formative decades of Indian foreign policy and looks at the prominent figures who were at the centre of this decisive period of change.

The book explores the history and evolution of the civil and foreign services in India during the last leg of British rule and the following era of post-independence Nehruvian politics. Rich in archival material, it looks at official files, correspondences and diaries documenting the terms served by the pioneers of Indian diplomacy, Girja Shankar Bajpai, K.P.S. Menon and Subimal Dutt, in Africa, China, the USSR and other countries and their relationship with the Indian political leadership. The book also analyses and pieces together the activities, strategies, worldviews and contributions of the first administrators and diplomats who shaped India's approach to foreign policy and its relationship with other political powers.

An essential read for researchers and academics, this book will be a useful resource for students of international relations, foreign policy, political science and modern Indian history, especially those interested in the history of Indian foreign affairs. It will also be of great use to general readers who are interested in the history of politics and diplomacy in India and South Asia.