From Indus to Independence - A Trek Through Indian History 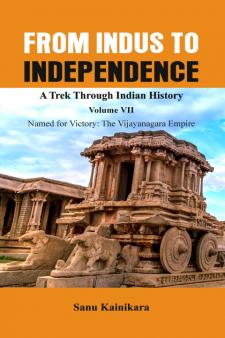 This is the seventh volume of the series on Indian history, From Indus to Independence: A Trek through Indian History, and provides the history of the great Vijayanagara Empire. Named in aspiration of victory—in both the spiritual and temporal realms—Vijayanagara more than lived up to its name for more than three centuries, before it was brought down by a number of factors, some of them beyond its control.
Vijayanagara was established at a critical juncture in the politico-religious history of Peninsular India. Even though it was not proclaimed as such, there is no doubt that the kingdom was created as the answer to the ferocious Islamic invasions of the 'Deep South' that was becoming a regular feature in Peninsular India. It succeeded in holding back the invading armies, for three long centuries, thereby blunting the zeal and urgency of the Islamic conquest. These three centuries provided the balm to make the interaction between Hinduism and Islam more congenial than at the outset of the Islamic invasion of the Deccan Plateau.
This book provides a detailed historical narrative of the great Vijayanagara Empire and carries out an assessment of its successes and failures. The book provides the reader with an in-depth understanding of the irrevocable and fundamental forces of history that have been instrumental in forming the present that we live today.