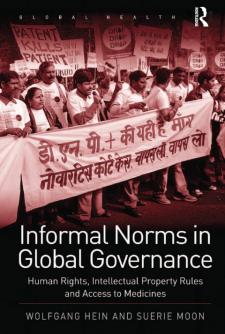 Hein and Moon take up a serious problem of contemporary global governance: what can be done when international trade rules prevent the realization of basic human rights? Starting in the 1990s, intellectual property obligations in trade agreements required many developing countries to begin granting medicines patents, which often rendered lifesaving drugs unaffordable. At stake was the question of what priority would be given to health-particularly of some of the world’s poorest people-and what priority to economic interests, particularly those of the most powerful states and firms. This book recounts the remarkable story of the access to medicines movement. The authors offer an explanation for how the informal, but powerful norm that every person should have access to essential medicines emerged after a decade of heated political contestation and against long odds. They also explore the stability and scope of the norm. Finally, the book examines the limitations of informal norms for protecting human rights, and when renewed focus on changing formal norms is warranted.