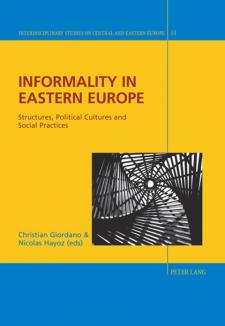 This volume deals with different aspects of informal structures and practices in Eastern Europe. Its objectives are twofold. It aims at discovering whether or to what extent informal structures and practices in Eastern Europe have meanings, functions, forms and effects different from those that can be observed in the politics and societies of Western Europe. The authors of this volume – most of them are from the region – have been invited to discuss the scientific relevance of the distinction informal / formal in their respective field of research or discipline. This points to the second objective of this volume which is to encourage a more fruitful interaction between disciplines that often disregard each other and which, despite inevitable and essential epistemological differences, have significant shared interests such as the comparative analysis of political phenomena in terms of elementary forms of social organization. The relation between informality and formality in a more methodologically pluralist and ultimately holistic way can be analysed via regards croisés between the disciplines anthropology, political science and sociology. This allows the extension of this comparative and multidisciplinary approach to other themes and phenomena of mutual interests.