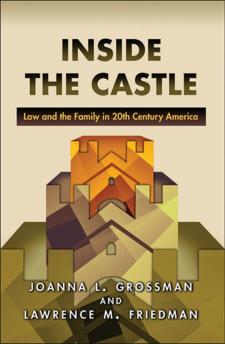 A comprehensive social history of families and family law in twentieth-century AmericaInside the Castle is a comprehensive social history of twentieth-century family law in the United States. Joanna Grossman and Lawrence Friedman show how vast, oceanic changes in society have reshaped and reconstituted the American family. Women and children have gained rights and powers, and novel forms of family life have emerged. The family has more or less dissolved into a collection of independent individuals with their own wants, desires, and goals. Modern family law, as always, reflects the brute social and cultural facts of family life.The story of family law in the twentieth century is complex. This was the century that said goodbye to common-law marriage and breach-of-promise lawsuits. This was the century, too, of the sexual revolution and women's liberation, of gay rights and cohabitation. Marriage lost its powerful monopoly over legitimate sexual behavior. Couples who lived together without marriage now had certain rights. Gay marriage became legal in a handful of jurisdictions. By the end of the century, no state still prohibited same-sex behavior. Children in many states could legally have two mothers or two fathers. No-fault divorce became cheap and easy. And illegitimacy lost most of its social and legal stigma. These changes were not smooth or linear-all met with resistance and provoked a certain amount of backlash. Families took many forms, some of them new and different, and though buffeted by the winds of change, the family persisted as a central institution in society. Inside the Castle tells the story of that institution, exploring the ways in which law tried to penetrate and control this most mysterious realm of personal life.