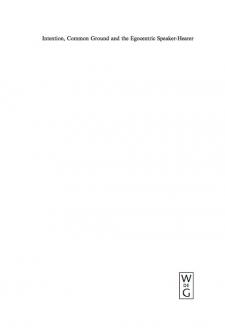 This book presents current research that discusses some of the major issues in pragmatics from new perspectives, and directs attention to aspects of fundamental tenets that have been investigated only to a limited extent.

Current pragmatic theories emphasize the importance of intention, cooperation, common ground, mutual knowledge, relevance, and commitment in executing communicative acts. However, recent research in cognitive psychology, linguistic pragmatics, and intercultural communication has raised questions that warrant some revision of these major tenets. Debates about the place of intention in pragmatics have indicated that Gricean intentions may play a less central role in communication than traditionally assumed. Cognitive psychologists pointed out that individual, egocentric endeavors of interlocutors play a much more decisive role in the initial stages of production and comprehension than current pragmatic theories envision. Some researchers criticized the Clark and Brennan's common ground model and Clark's contribution theory arguing that these approaches retain a communication-as-transfer-between-minds view of language, and treat intentions and goals as pre-existing psychological entities that are later somehow formulated in language. All these developments are addressed in the papers of the volume written by prominent scholars representing several disciplines.