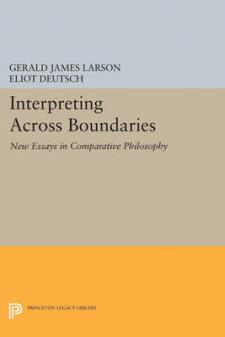 This volume is a "state-of-the-art" assessment of comparative philosophy written by some of the leading practitioners of the field. While its primary focus is on gaining methodological clarity regarding the comparative enterprise of "interpreting across boundaries," the book also contains new substantive essays on Indian, Chinese, Japanese, and European thought. The contributors are Roger T. Ames, William Theodore de Bary, Wing-tsit Chan, A. S. Cua, Eliot Deutsch, Charles Hartshorne, Daya Krishna, Gerald James Larson, Sengaku Mayeda, Hajime Nakamura, Raimundo Panikkar, Karl H. Potter, Henry Rosemont, Jr., Ben-Ami Scharfstein, Ninian Smart, Fritz Staal, and Frederick J. Streng. Comparative or cross-cultural philosophy can be seen as a relative newcomer to the field of philosophy. It has its antecedents in the emergence of comparative studies in nineteenth-century European intellectual history, as well as in the sequence of East-West Philosophers' Conferences at the University of Hawaii, which began in 1939.
This book will prove to be of great significance in helping to define a field that is only now becoming fully self-conscious, methodologically and substantively, about its role and function in the larger enterprises of philosophy and comparative studies. Originally published in 1988. The Princeton Legacy Library uses the latest print-on-demand technology to again make available previously out-of-print books from the distinguished backlist of Princeton University Press. These editions preserve the original texts of these important books while presenting them in durable paperback and hardcover editions. The goal of the Princeton Legacy Library is to vastly increase access to the rich scholarly heritage found in the thousands of books published by Princeton University Press since its founding in 1905.