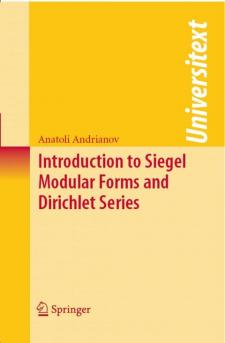 Several years ago I was invited to an American university to give one-term graduate course on Siegel modular forms, Hecke operators, and related zeta functions. The idea to present in a concise but basically complete and self-contained form an int- duction to an important and developing area based partly on my own work attracted me. I accepted the invitation and started to prepare the course. Unfortunately, the visit was not realized. But the idea of such a course continued to be alive till after a number of years this book was ?nally completed. I hope that this short book will serve to attract young researchers to this beautiful ?eld, and that it will simplify and make more pleasant the initial steps. No special knowledge is presupposed for reading this book beyond standard courses in algebra and calculus (one and several variables), although some skill in working with mathematical texts would be helpful. The reader will judge whether the result was worth the effort. Dedications. The ideas of Goro Shimura exerted a deep in?uence on the number theory of the second half of the twentieth century in general and on the author’s formation in particular. When Andre ` Weil was signing a copy of his “Basic Number Theory” to my son, he wrote in Russian, ”To Fedor Anatolievich hoping that he will become a number theoretist”. Fedor has chosen computer science. Now I pass on the idea to Fedor’s daughter, Alexandra Fedorovna.