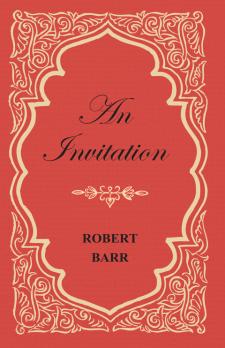 This early work by Robert Barr was originally published in 1892 and we are now republishing it with a brand new introductory biography. "An Invitation" has Lord Archbishop of Treves meeting with the The Countess of Starkenburg, a widow living in Castle Starkenburg. Robert Barr was born on 16th September 1849 in Glasgow, Scotland, but he and his parents emigrated to Upper Canada when he was just four years old. He attended Toronto Normal School to train as a teacher and this career path led him to become headmaster of the Central School of Windsor, Ontario. During his time as a headteacher he began to contribute short stories to the Detroit Free Press, a publication for whom he left the teaching profession to become a staff member in 1876. He wrote for them under the pseudonym "Luke Sharp", a name he found amusing on a sign reading "Luke Sharpe, Undertaker" that he used to pass on his daily commute to work. In 1881 he left Canada for London to establish a weekly English edition of the Detroit Free Press. He remained in England to found The Idler, a monthly magazine he collaborated on with the popular humourist Jerome K. Jerome. Robert Barr died from heart disease on October 21, 1912, at his home in Woldingham, a small village to the south-east of London.