The Iroquois and the Athenians 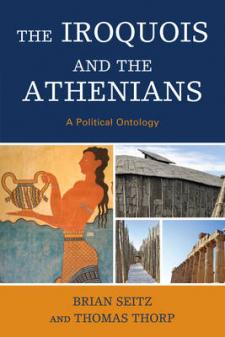 Political communities are constituted through the representation of their own origin. The Iroquois and the Athenians is a philosophical exploration of the material traces left by that constitutional act in the political practices of the classical Iroquois and Athenians. Tempering Kant with Nietzsche this work offers an account of political action that locates the roots of justice in its radical impossibility, an aporia in place of a foundation. Instead of mythical references to a state of nature or an act of the founding fathers, the Iroquois and the Athenians recognized that political legitimacy can never be established, in principle, but must be continually enacted, repeated, a repetition that stimulates the withdrawal of natural foundations and holds open the site of any possible democracy.

For philosophers and political theorists, this is a unique, hybrid deployment of Kant (the transcendental move) and Nietzsche (the use of history), offering a new view of the origins of Democracy. Scholars in Native American Studies will find much of value in its unprecedented use of traditional Iroquois political discourse and practice as a resource for mainstream political philosophy. Finally, scholars of ancient Greece and Classics will appreciated its novel presentation of ancient Greek political discourse and political practice.